Why Bitcoin Is an Environmental and Productivity Disaster

There have recently been several news articles about Bitcoin’s high electricity consumption. In this Special Section we assess the validity of this claim and consider to what extent the electricity use is an impediment to its long term sustainability as a payment system.

Our conclusions are damning. Bitcoin in its current form is totally flawed as a payment system due to exploding electricity use and sky high transaction costs. Bitcoin today consumes slightly more electricity than the whole of New Zealand; if prices are sustained at the current level, the power consumption will gradually increase until the power consumption is equal to Spain. If Bitcoin bulls are right and the price rallies to $1million, Bitcoins will be mined until consumption equals US, China and the European Union combined. This power capacity obviously does not exist and would require the world to build 1,800 new large scale coal plants at a cost of $2.4 trillion. As 75% of the current mining activity is performed in China it is already a brewing environmental disaster directly responsible for burning millions of tons of low quality coal. We estimate Bitcoin is already causing more emissions than the largest Canadian oil sands producer and in the $1m per Bitcoin scenario, global CO2 emissions would increase by 33%! Furthermore, the high electricity consumption means that at the current price level, Bitcoin already has a transaction cost 50x higher than using checks, the least efficient payment system available. In fact, it is more inefficient than a barter economy. The numbers are so ridiculous that this obviously cannot happen.

It is important to stress that this does not mean that blockchain technologies in general have no future. There are alternative processes that do not require computing power that grows exponentially with size. This is where the focus should be.

In the following section we briefly explain how Bitcoin works, why it consumes so much electricity and thus becomes such an environmentally harmful and inefficient payment system. Finally, we reference some alternative blockchain technologies in the research stage which could circumvent these problems that, we believe, for Bitcoin, are insurmountable.

How the Bitcoin blockchain works

Bitcoin is a public peer-to-peer payment network where all transactions are stored in a public ledger consisting of a chain of blocks with recorded transactions, hence the name blockchain. The figure below illustrates in the simplest way the system works. 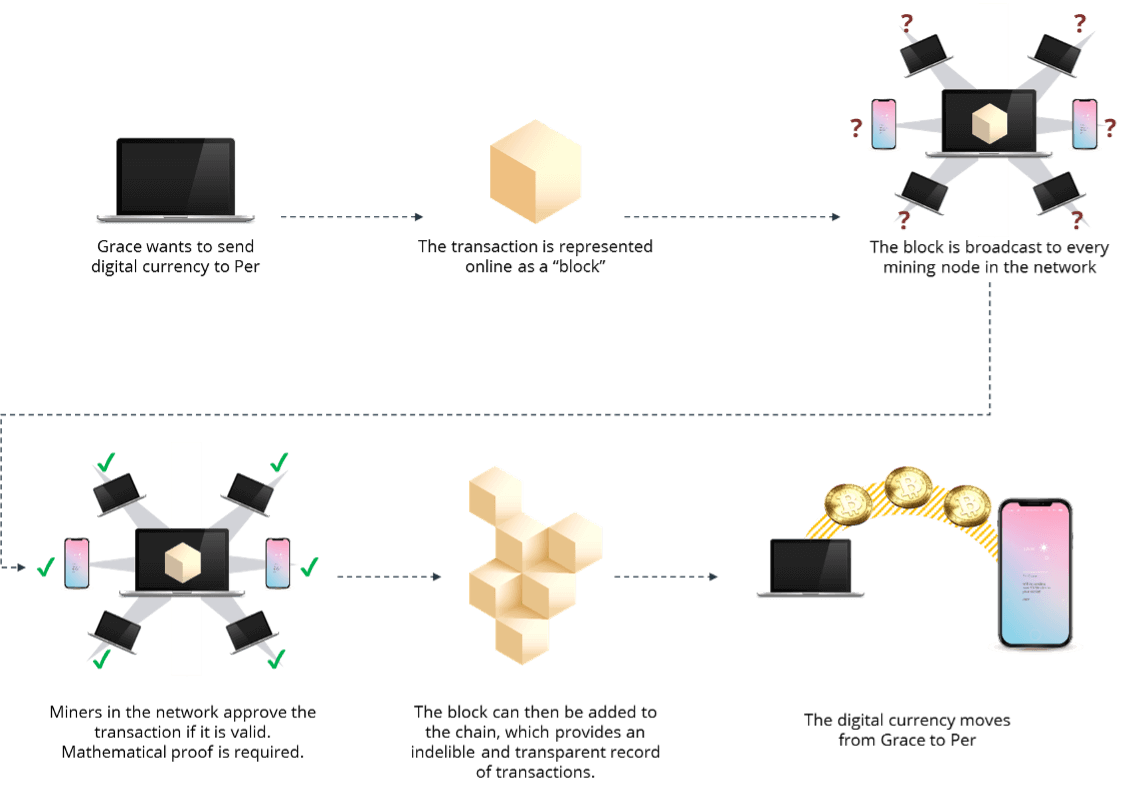 When two people agree on a transaction it is bundled together with other recent transactions (up to ~3600 theoretically, but more like 2700 in practice) into blocks. A network of miners operate the network, making sure the transactions are verified, adding transactions to new blocks, ensuring new blocks are correctly added to the existing blockchain, and finally making sure the complete blockchain is maintained and visible for everyone.

The process of adding new blocks is crucial to the security mechanism of Bitcoin. When miners try to add new blocks they will need to identify an unknown key through a process call “proof of work”. The only way to identify this number is through brute force, or simply trying trillions of numbers. Once the correct number has been identified the miner will receive 12.5 Bitcoins in monetary reward (in 2 years the reward will be halved to 6.22), and the new block will be added to the network. While it is extremely hard to create new blocks, it is very quick to verify that it “fits” into the block chain, and hence the entire network will immediately accept the new block as correct. The purpose of this construct is to make the network immune to manipulation. Miners will only work with the longest blockchain out there (the most updated one), and the only way for a hacker to edit an old transaction is to try to append information to an old node of the blockchain. However, she then needs to make her blockchain longer than the correct one, which means her computer power needs to be bigger than all the other miners combined, a task completely unrealistic for any individual or organization at this point.

New transactions are added to the blockchain by “miners” at a speed of one block every 10 minutes. As more miners join the network, the rate of block creation will go up, but once every two weeks (2016 blocks), the network will adjust how difficult it is to identify new blocks in order to make sure the speed stays at 10 minutes. This ensures the supply of new Bitcoins remains constant. However, this also means the network is theoretically limited to ~6 transactions per second over time, and in practice limited to ~4-4.5 transactions per second.

Mining is an extremely profitable business, but electricity use grows with price

Miners are running the Bitcoin network, and for this job they are rewarded with Bitcoins. As the transaction speed of the network is limited, the miners will also be rewarded with optional transaction fees which are paid to ensure that new transactions are quickly added to new blocks. The average transaction fee is currently slightly above $30/transaction. As the price of Bitcoin has skyrocketed, mining has become an extremely attractive business, with paybacks of less than 3 months for state of the art equipment. 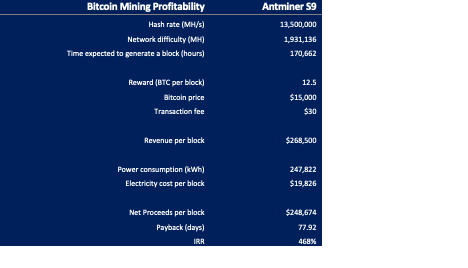 As the table above indicates, the Antminer S9 (state of the art Bitcoin mining equipment), currently consumes 250MWh per block, or 92kWh per Bitcoin transaction. As the average energy efficiency of the kit in use is much lower, we estimate the average energy consumption per transaction is currently closer to 310kWh. This translates into roughly 35TWh per year, or roughly the same as the total electricity consumption of New Zealand.

However, the high returns also lead to Bitcoin’s big energy problem. Given these outsized returns, more miners will enter the market. The Bitcoin network will respond to this surge in mining activity by increasing the difficulty factor of creating new blocks (see chart below), to ensure that the transaction speed stays constant (and hence the supply of new coins is constant). Given that this is a perfectly competitive market, new miners will continue to enter the market until the returns are competed away. The number of computations explodes, driving up the energy use of the network.

If one believes that the current price of Bitcoin is fair, the energy consumption of the system is destined to further increase. As a perfectly competitive market the difficulty should increase to a level where the revenue per block is similar to the marginal cost of electricity, implying the complexity factor at current prices should go up around 18 times, driving total energy consumption of the system to 235TWh, the same size as Spain.

This is where the bull case really starts to crack. Some bulls have argued for a Bitcoin price of $1 million by 2020. However, that would drive electricity consumption to roughly the combined total use of USA, China, and the entire European Union. At that point each Bitcoin transaction would consume 78MWh of electricity (the yearly consumption of 15 UK households), and the transaction cost would reach $4,660.

While supporters of Bitcoin argue that the decentralized and fully transparent blockchain technology will disrupt the traditional banking system and drive enormous social cost efficiencies, the reality of its current implementation is entirely the opposite. As it stands the Bitcoin network is extremely slow and ridiculously expensive. Transaction speeds are currently limited to 6 transactions per second, (but as mentioned above, the real speed has never gone above 4-4.5 transactions per second). By comparison Visa/MasterCard performs on average 2,000 transactions per second in their network, with significantly higher peak rates. At the current price, Bitcoin miners are charging $99 for each transaction they process, a figure which would go up if Bitcoin prices increase, hence rendering the system completely useless as a mass market payment system.

Environmentally the concept is a complete disaster

Even before Bitcoin has really taken off, we would argue it is one of the most polluting businesses on the planet, directly responsible for more twice the emissions of Suncor, the largest oil sands company in the world, and larger than BHP Billiton, the world’s largest mining company.

However, as electricity consumption continues to rise, so, naturally, will its environmental impact. At current prices Bitcoin CO2 emissions will quickly rise towards 250m tons, similar to every coal plant in Germany, the largest European coal consumer. And with higher prices the situation will get worse.

A different approach is needed

The above is a static analysis of the situation today, but clearly highlights that energy consumption is a key limiting factor for the mass adoption of Bitcoins. There are proposed solutions to address this shortfall, but we do not see an easy fix as the energy challenge is fundamentally linked to the security mechanism of the system.

One proposed solution is to have a layer on top of Bitcoin where one can perform physical transactions, similar to how monetary systems in the old days were backed by gold. However, this takes away one of the arguments for cryptocurrencies in terms of transparency and also raises questions around counterparty risks etc, similar to what one has in the traditional banking system.

Another proposed solution is to change the authentication system from proof-of-work to proof-of-stake, which gives people owning more coins more power. But, this will create a Bitcoin mining elite, which controls the system, quite the opposite to the fundamental idea of being open.

In addition to reducing its energy demand, Bitcoin also needs to radically improve its transaction speed. A very simple solution is to increase the block size, allowing more transactions to be recorded in each block. However, this will radically increase the size of the blockchain. The blockchain is only 150MB today, so a 10-folding of the transaction speed should not create any huge problems. However, 1000-folding the speed would create a 150GB blockchain which would also be growing rapidly. This again quickly conflicts with the fundamental idea of the transaction ledger being open and visible to everyone.

Our best guess at this point is that over time new implementations will emerge addressing these shortfalls, but betting on Bitcoin world domination at this point feels more like a roulette game than anything else.