The relevance of renewables (RES) is changing rapidly. Although mainstream perception is that RES is still a highly subsidised minor technology, Solar and Wind capacity additions are growing at several times the rate of conventional power generation investments. Looking at global total investments is misleading. While total cost of installation has decreased from $324bn atits peak in 2015 to $273bn in 2017, our team estimates that the installed capacity of Solar and Wind globally grew 161GW in 2018, with the number potentially reaching 250GW in 2023. Over the next five years we expect cumulative renewable installations to be six times higher than conventional power generation.

While the development of RES was initially boosted by subsidies thanks to a global drive to reduce carbon emissions, the industry is now able to stand on its own two feet in many countries with subsidies to new projects largely disappeared. With the manufacturing cost of the equipment having dwindled to a fraction of its original figure thanks to economies of scale (China led), and the operating costs being close to negligible, the total cost of RES generation has now reached levels below conventional power generation costs in many parts of the world; i.e it is cheaper to produce electricity with renewables than with nuclear, coal or gas plants. In some markets such as Europe and Latam, new-build solar is even viable at half the current electricity price.

Renewables investments, especially solar, are less affected by resistance from “Not in My Back Yard” pressure groups. They also benefit from much shorter development times than conventional power plants. A large scale solar development can be completed in one to two years, with actual construction only taking a few months.

Solar can also be developed closer to demand centres with the size being adapted to demand.

In 2018 the trend to move away from fixed feed-in tariffs to auctions has continued at full speed, with most large markets well advanced in the transition. India, Germany and Spain have adopted this process, while Latam has always used it. Recently, we have seen more developers pursuing renewables through PPAs signed directly with customers - mostly corporate groups eager to show their stakeholders they are serious about green energy - at levels well below forward power prices. In Portugal for instance we observe new-build solar costs at around $30/MWh even with relatively conservative assumptions, compared to a wholesale power price of $60/MWh+.

The first renewable manufacturing company, Vestas Wind Systems passed the milestone of 100GW of installed capacity in early January 2019. The environmental impact is equivalent to replacing almost 300million barrels of oil or 129million tonnes of CO2 emissions annually. This is tantamount to removing more than 70 million cars permanently from the roads or replacing them by 100% emission free alternatives. While EVs have zero tailpipe emissions, they have quite significant emissions associated with the electricity they consume. In Europe today, the marginal electricity is still supplied by coal, which in fact means the incremental CO2 emissions of an EV is slightly higher than a comparable gasoline/diesel car in Europe. Assuming CO2 markets start to function and natural gas becomes the marginal power source, the emissions from an EV would halve, positioning it slightly ahead of a best in class Hybrid car.

This does not mean EVs are not needed in the future, but highlights that RES generation is currently much more effective at reducing total carbon emissions, as you directly displace fossil fuels (first coal, then natural gas) in favour of sustainable energy. It also means the vision of natural gas as a clean fuel for the future is somewhat flawed from a climate change perspective, as it is hardly any better than an efficient gasoline hybrid engine. However, EVs have a significant environmental benefit locally, lowering particles and NOx emissions as well as noise. While subsidies for renewables are quickly coming down, this is not the case for EVs. EV sales still benefit from subsidies of up to $10000+ per car in countries like USA, China and Norway (where sales are concentrated). We expect global subsidies for EVs will surpass that of renewables in 2021, but the incremental carbon savings from renewables will be more than 50x that of EVs. 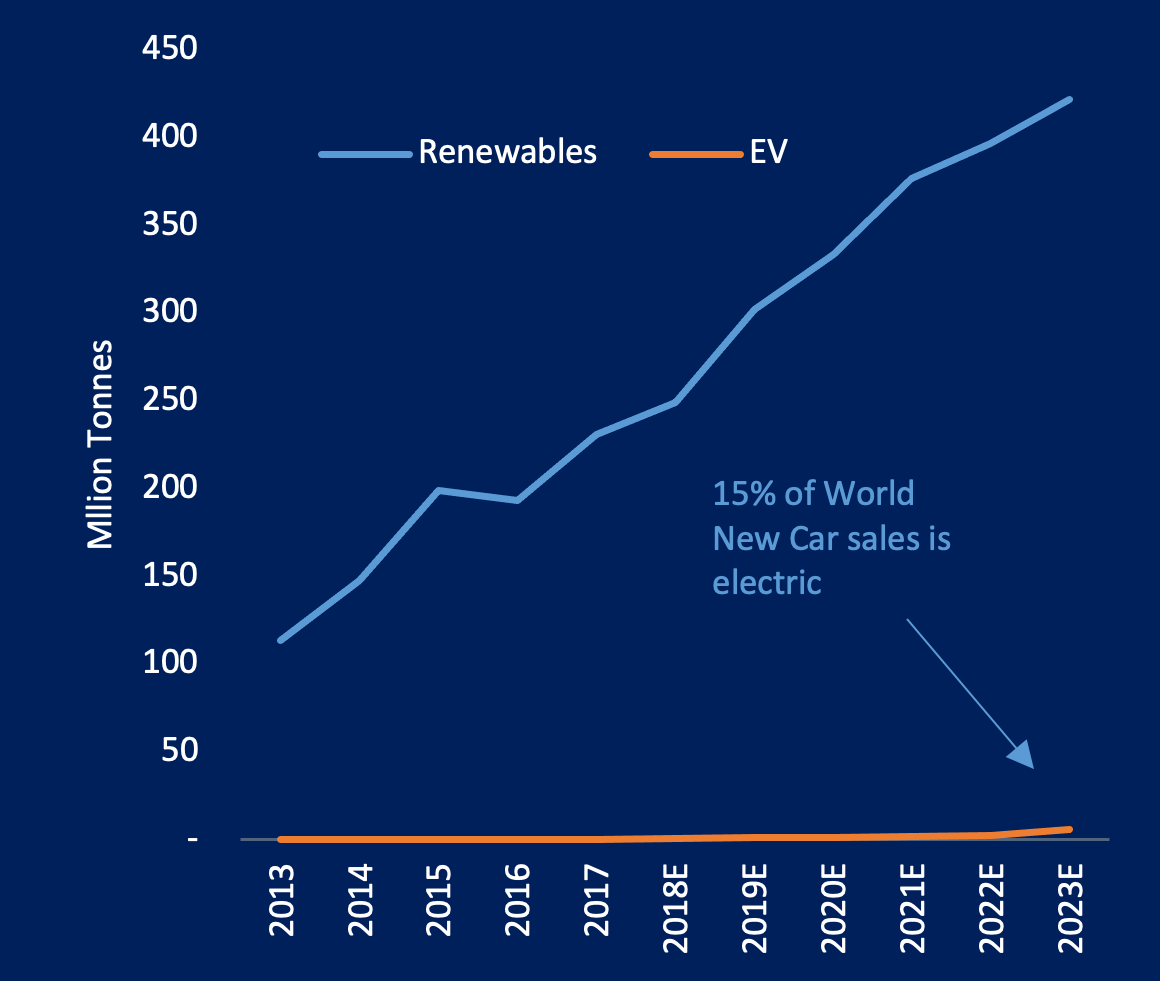 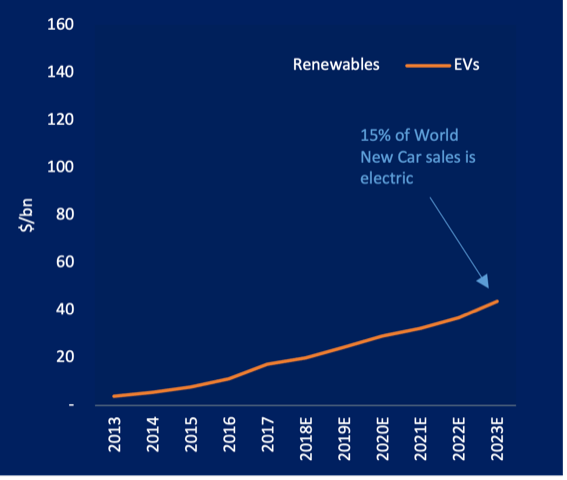 At the start of 2019 we believe renewables have truly crossed the chasm and have become a mainstream technology rapidly transforming the power sector. It has a huge impact on addressing the biggest pollution source in the world while offering potential for long term savings. While renewables are becoming the lowest cost technology, other limitations such as intermittency and the need for backup power, still remain an issue. However, for most markets these problems are many years away from presenting real roadblocks, as the installed capacity of conventional generation is already there and renewables still only represent c.9% of global electricity generation.