The current global energy crisis has emerged as a new threat to the recovery out of the COVID pandemic. Energy commodity prices, including power, gas and coal, have seen record increases in Europe and Asia. We are seeing on a daily basis how countries are hastily cobbling together new emergency measures – windfall taxes in Spain, forced takeovers of bankrupt suppliers in the UK, forced shutdown of energy consuming industries in China, just to name a few. The evolution of the crisis will depend on the weather over the next few months. However, even if we expect energy prices to remain high and volatile, which will add to the inflation and slowing growth concerns, under most scenarios we would not expect the situation to worsen. Only with exceptional weather events, such as the 2009-2010 winters, would we have significant security of supply issues.

While we are relatively optimistic about the short term, we argue that the current crisis is not an isolated event, but just the precursor of recurring events over the rest of the decade. We see two fundamental reasons:

The severity of the situation varies from region to region. The US are in principle in a better position, given their large natural resource availability and, at least for now, less stringent climate policies. Conversely, Northern Continental Europe and the UK are much more vulnerable, as we have recently experienced. While this has taken regional policymakers by surprise, the current situation could have been anticipated. Indeed, power scarcity was the theme for our Lansdowne 2018 Investor day presentation, where we analysed the European power situation out to 2025, concluding that we had an emerging supply crises developing in the 2022-2025 period. We have now updated our 2018 projections for Northern continental Europe (Germany, Benelux, France, Austria, Switzerland), which has led us to confirm and reinforce our previous views.

The supply and demand balance in Central Europe’s power system is likely to be put under significant strain. For supply, we expect coal nuclear closures equivalent to the thermal capacity of the Netherlands and Belgium and low non-renewable capacity additions. Further, the acceleration of demand growth due to transport electrification will only exacerbate the imbalance. Consequently, the system will be fragile and weather dependent, and the avoidance of future power crises will be a matter of luck.

The chart below shows the capacity outlook for ‘firm’ non-renewable capacity for the analysed region (Germany, Benelux, France, Austria and Switzerland) until 2025. Around 12% of the current capacity will be phased out. We expect the region to lose 15 GW of nuclear and 13 GW of coal (mainly lignite), relative to 2019 capacity levels.

All of the remaining nuclear capacity in Germany (c.8 GW) will be shut, half at the end of this year and the rest at the end of 2022, and it is expected that Belgium will have shut down all of its nuclear capacity in 2025. Coal closures (hard coal and lignite) are the consequence of the 2020 German coal phase out plan. It is worth noting that the current negotiations for a new German government might mean that the coal phase-out is further accelerated. There might also be additional coal closures due to corporate strategy decisions. In particular, RWE and Uniper seem to consider speeding up coal closures as parts of their strategies to become more renewable focused utilities.

Partially offsetting the closures, we include the gas capacity expected to be available from the EEX transparency portal. Engie has already signalled their intention to build up to c.3 GW of gas capacity to replace the lost nuclear capacity in Belgium; however, since they have just started the permitting process, we do not include these within our time horizon. RWE is building a new 300 MW gas plant to be commissioned by the end of 2022, and a number of players are looking to build small CHP plants, but the overall effect will be small.

Thermal Capacity in Central Europe is Expected to Decline by c.12% by 2025 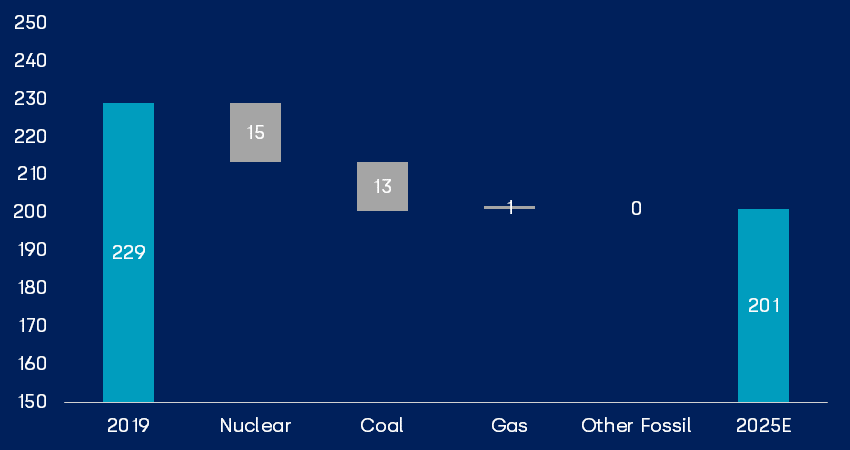 On the surface this seems to be no big deal as our expected renewables additions are far higher than thermal closures (111 GW of additions vs 28 GW of closures, +45% renewable capacity), with Germany expected to contribute the most in solar and onshore wind (31 GW and 13 GW, respectively).

However, the comparison of thermal and renewable capacity numbers is misleading, due to much lower load factors for renewables.

We can clearly see this effect in production volumes. We expect a steep decrease in thermal generation, mainly driven by nuclear (115 TWh). For coal, we would highlight that existing plants would need to run at higher load factors to offset the decrease in thermal capacity. The loss of thermal volumes is partially compensated by higher renewable production (c.103 TWh). All in all, in our view, total generation volumes would decrease by c.33 TWh (2% of production in 2019). We would also highlight that renewable production is unpredictable and there could be curtailments, which in effect would mean that the net usable generation volumes could be even lower.

Central Europe is Expected to Lose c.2% of Production by 2025

We can compare the net loss in production with the outlook for demand volumes. For the past decade, Central European demand has been lacklustre (see chart below), as the region went through the aftermath of the GFC and consumers shifted to more energy efficient options (e.g. lighting, higher focus on thermal insulation).

In the next few years, we anticipate a jump in adoption of electric vehicles, which, if we do not assume reverse flows from the vehicles to the grid, will add to existing demand. Other sources of demand include heat pumps and the additional demand created from electrification (e.g. industrial heat from electricity). Indeed, the German Energy Ministry (BMWi) has recently upgraded their 2030 target from 581 TWh by 2030 by 11-14% (to 645-665 TWh) on similar grounds, and the German Association of Water and Energy BDEW assumes an even higher 700 TWh in 2030 (from c.500 TWh in 2019). Please note these numbers include the impact of hydrogen on demand, which we do not expect to materialise until the end of the decade, and therefore we assume that the development of demand should be gradual, and will probably accelerate by mid of the decade.

Capacity Plans will Magnify the Imbalance

All in all, the system will lose 33 TWh in production, with demand growing by 65 TWh, resulting in an incremental imbalance of c.98 TWh (7.7% of 2019 demand), which will put further pressure on the power system.

Note that what is relevant is the available capacity, not the nameplate, as unavailable units obviously contribute nothing. An assessment thus requires to adjust capacity by de-rating factors, which are uncertain, and for renewables, also highly weather dependent. Our de-rating factors are shown in the table below, where for renewables we have introduced a Low and a High case, depending on the weather. Our used de-rating factors are in line with common experience and practice from system operators, but obviously there is debate on this. Thus, we would in our analysis focus more on the direction than on the exact level, where there might be a few percent uncertainty. 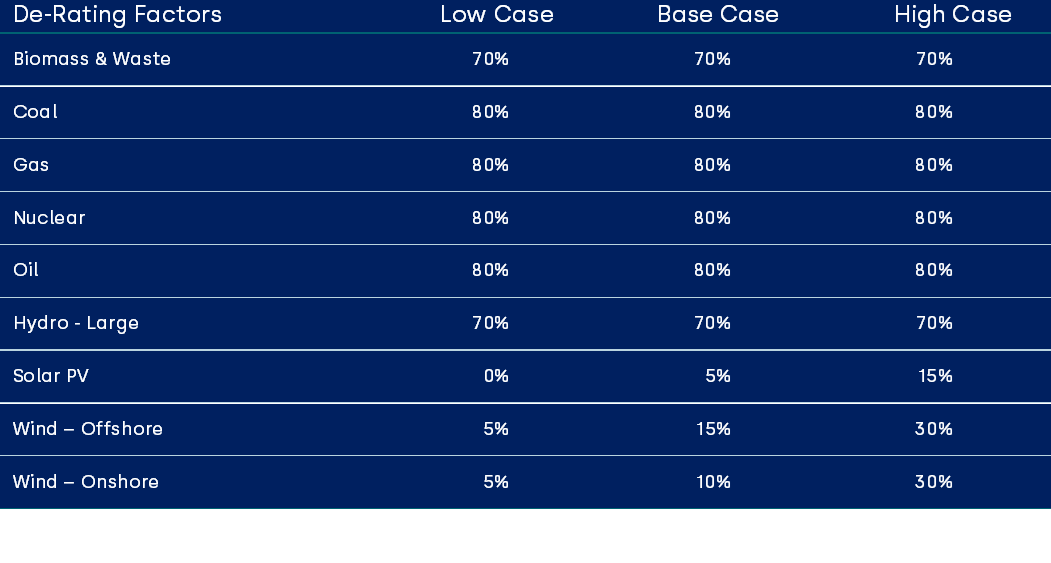 The chart below shows our assessment for the reserve margin development 2012-2025E. On our numbers, reserve margins have been above the critical level of 10% until 2019. The projections for 2020-2025 show that, as the renewable capacity grows, so does the variability of the reserve margin. Under the High Case, the system meets the required availability. However, for the Base and Low Cases, the output of the model points to a severely undersupplied system, significantly increasing the probability of blackouts or brownouts.

The chart below shows our assessment of the need of new gas capacity to rectify the situation. We estimate that we would need 10% of new firm capacity or around 35 GW. This should be compared to a firm current pipeline of c.2 GW up to 2025.

We would highlight the difficulty of bringing online the required gas capacity in time, given it usually takes 4 or 5 years for new plants. It is therefore too late to avoid recurrent power crises in the next few years.

Separately, storage capacity upgrade seems to be the natural course of action. There are a number of options:

Conclusion – Too Late to Fix

While there is of course uncertainty as to the exact levels of reserve margins, our analysis indicates such a large imbalance that it seems very clear that central Europe is developing into a significant power shortage. We have already seen this year that the situation is rather tight, it will get significantly worse already at New Year, as half of the German nuclear capacity will shut down, and then it just gets worse and worse. By 2025 the region lacks in our view at least 10% of new dispatchable capacity, which, given climate constraints, undoubtedly would have to be gas fired. That in turn would of course raise the question, is this gas available? While we have not done the work it looks likely that the situation would deteriorate further if we prolonged the outlook towards 2030 given further coal closures and by then much more rapid power demand growth due to the energy transition.

We want to stress the weather dependency and how this affects investment signals. For most of the time the system will be in oversupply and prices will be low. But then occasionally supply gets unusually low, and if this happens during high demand winter periods there is a sudden price spike and security of supply issues. The weather volatility might mean that things pan out much better than we forecast in our base case, but the opposite is also true.

So what can and should be done?

Given the high costs of large nuclear reactors and given the urgency of the situation, new nuclear is not an option even if there was political support. Delaying existing nuclear shutdowns would alleviate the problem, but is in our view not a political option.

For the second half of the decennium a significant program of new gas peakers that at a later stage could be converted to hydrogen is a solution. The problem is that the power market is unlikely to provide investment signals as power prices will be low for most of the time until there is a dramatic spike. It also raises the question about gas costs, availability and ever increasing reliance on Russia as the saviour for European energy scarcity.

Accelerating renewables buildout makes sense from an overall climate perspective, but does not solve the reserve margin problem.